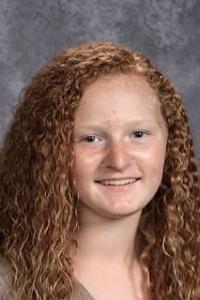 4.23.21 – Ellie Jones, current sophomore at Plymouth High School, received some very exciting news from IHSAA this past week.  She was informed that she had been selected as as one of the nine incoming juniors in the entire state to serve on the prestigious IHSAA Student Advisory Committee.

The multi step selection process ended this past weekend when she was granted one of the 20 in person interviews down in Indianapolis last Sunday.

Ellie is the daughter of Derek & Lisa Jones.  She will be a varsity letter winner in 3 sports as a sophomore(volleyball, basketball, and tennis).  Ellie has a GPA greater than 4.0 which her ranks her in the top 2 percent of her class.   She joins four former PHS student athletes (Cece Robinson, Ellen Smith, Haley Harrell and Megan Barron)  who have all previously served on IHSAA Board while attending Plymouth High School.

The IHSAA NEWS RELEASE – 4.23.21  explains in greater detail about the process and the leadership responsibilities that Ellie will now have over the next two years.

Congrats Ellie!  PHS is very proud of you!