The Rockies dented the scoreboard early and often Wednesday night on a beautiful day to be outside kicking the ball around.  Adrian Cardona drove one home five minutes into the contest jump-starting the Rockies to a 1-0 lead.  Manny Baca would drive a second goal home with 14 minutes remaining in the first half to increase the Rockie lead to 2-0.  The scored remained that way up until halftime.

The Rockies came out blazing in the second half as Cardona scored his second goal 16 seconds into the half increasing the Rockie lead to 3-0.  Less than five minutes later Baca went the distance on the left side battling two Michigan City defenders for the ball and drove the ball to the back of the net for a 4-0 Rockie lead.

At that point the game became a little “chippy” as Michigan City was getting frustrated.  The Rockies retaliated with some not so smart play of their own.  A couple yellow cards were distributed and both teams played on.

Selvin Pagoada increased the Rockie lead to 5-0 with a goal and only 15 minutes remained in the sectional contest.  Michigan City would get their only goal of the game with 1:16 remaining in the contest as the Rockies committed a foul in the box resulting in a PK opportunity for the Wolves which they converted.

In the final 30 seconds of the contest, the Rockies earned a “Highlight Goal”.  Senior Lucas Bowering received a pass on the right side, dribbled up 8 yards, and ripped a shot pass the Michigan City goalie from 20 yards out for the 6th and final goal of the night for the Rockies.  The Rockie players and Plymouth student section erupted for Lucas!

The win moves the Rockies to 7-9-2 on the year.  They play for the Sectional Championship Saturday afternoon at School Field in South Bend starting at 2:00.  The Rockies will face off against host South Bend Adams.  The Eagles were victorious over LaPorte 3-1. 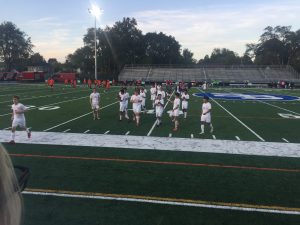 The Rockies come to celebrate with the crowd after their victory.