Jason Benner was an excellent athlete in his Plymouth High School class of 1992.  He also earned the distinction of being named the Valedictorian of his graduating class.

While a student at PHS, “Jake” participated in three different sports, a rarity in this day of specialization.  Jake was very successful in cross country, basketball, and baseball.  He was also a leader on three teams that had huge success!

During his freshman year in cross country, he was an alternate on a team that finished in 3rd place in the State Cross Country meet.  In basketball during his senior year, he lead the Pilgrims to a sectional championship and an 18-6 record.  In baseball, he was the lead-off hitter and left fielder that lead the Pilgrims to a sectional and regional championship and a 32-3 record.  The Pilgrims came within one game of qualifying for the Final Four in the pre-class IHSAA system.

After a successful academic and athletic career at Plymouth High School, Jake matriculated to Purdue University in pursuit of an Engineering Degree.  He later earned his Bachelor of Science degree in Industrial Engineering.

Jake currently lives in Atlanta, GA with his wife Courtney Tobias Benner.  They have two sons.  Their names are Grant (9) and Reese (6).

Jake currently works for Manhattan Associates.  They specialize in providing commerce and supply chain software for the leading retailers in the world to help them sell and deliver their merchandise to the customer on-line or in their stores.

In order to earn the distinction of the title Valedictorian for his 1992 graduating class, Jake had to be very organized and disciplined.  Especially since he participated in a sport in all three seasons.

According to Jake, “Monday through Friday, there wasn’t a lot of free time between going to school and practice/games.  I would focus my time on getting my homework done during the day/breaks before practice and use time at night to study/review for tests.”

Even today Jake draws on these same ideas to complete his tasks.  “I use my focus, discipline, and time management skills as an adult to balance work, family life, and many other volunteer activities.”

The Plymouth High School Athletic Department would like to thank Jake for his contributions and the information in this article.  We wish him and his family the best of luck moving forward in their lives. 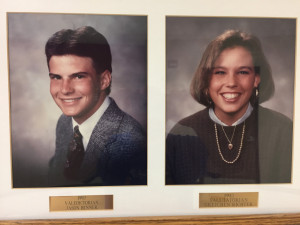