Our Plymouth Athletic website will continue to keep you aware of former Pilgrim/Rockie athletes.  This year we are focusing on former PHS athletes that were valedictorians or salutatorians of their graduating class.

This first article will include information about the 1986 PHS Salutatorian Janis Jeffirs Holiday.  Janis grew up in a very large family in Plymouth as she had 11 siblings.  Janis was the final sibling in this Plymouth family that included other brothers and sisters that were also valedictorians or salutatorians.

While a student-athlete at PHS, Janis participated in track and field, basketball, and volleyball.  Volleyball was her most accomplished sport as she played all four years of her high school career.  She earned the distinction of making the NLC All-Conference team in volleyball, while also earning state recognition by being named to the Volleyball All-State Academic team.

During her time at PHS, the volleyball team had tremendous amounts of success.  Janis played during the time before the IHSAA initiated the current class system in 1997 we have across the State of Indiana.  The PHS Volleyball teams of 1984 and 1985 finished as runner-up in the state championship tournament.  In 1984, the Pilgrims fell to Clinton Prairie.  In 1985, the Pilgrims dropped the State Championship game to Muncie Burris.

After graduating from PHS in 1986, Janis went on to the University of Notre Dame.  She earned her Bachelor of Arts degree from ND in 1990 in Psychology and Computer Applications.

Janis currently works for the government agency known as the Marshall County Council on Aging.  She is the Transit and Accounting Manager for them.  She helps to provide public transportation, Meals on Wheels, and Social/Educational Programming for the senior citizens of Marshall County.

She and her husband Mark, live in the Donaldson area of the Plymouth School District.  Over the past 25 years of marriage, they have four children that have graduated, or are currently attending Plymouth High School.  Dylan is 21 years old, and will be graduating from Manchester University in December.  Cole, 18, will be a freshman at Holy Cross College this fall.  Brady, 17, will be a senior at PHS this year while sister Cassidy, 16, will be starting her junior year at Plymouth.

To become one of the top students in her class of 1986, Janis had to learn how to budget her time between academics and athletics.  One of the first things she figured out was how to take advantage of breaks, bus rides and downtime between events to study.  Janis thinks student-athletes are disadvantaged today because of the distractions of social media and cell phones they must deal with.

“I think the key is figuring out what works for you like playing music or needing quiet when studying,” says Janis.  “Using your downtime as much as possible so you have time to relax at home is also important.  Being self-aware and using time efficiently are definitely like-skills that are useful beyond the classroom.”

The PHS Athletic Office would like to thank Janis for her help with this article.  We wish her and her family the best of luck in their future years! 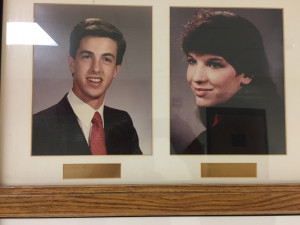