18 high school student-athletes from across the Hoosier State will begin the school year as members of the 2017-2018 IHSAA Student Advisory Committee (SAC).

Nine incoming juniors will join nine seniors beginning their second year with the group. They will receive hands-on experience in various areas as well as serve as a student voice to the IHSAA staff.

PHS junior Cece Robinson was nominated by PHS Principal Jim Condon and PHS Athletic Director Roy Benge.  After going through the interview process, Cece was selected by the committee to join the SAC group for the next two years!  Other former PHS students that have been chosen for this group include graduates Megan Barron (2011) and Ellen Smith (2014).

Cece participates for the Pilgrims in soccer, basketball, and track and field.  As a sophomore this past year, Cece qualified for the IHSAA State Finals in the shot put.

The SAC, which began in 2001-2002, represents the entire IHSAA membership of 409 schools, and its structure reflects that of the IHSAA Board of Directors in terms of classification and districts.

The SAC meets four times annually – twice each semester – and is responsible for hosting meetings with student peers at the upcoming Fall Area Principals Meetings, assisting with the award ceremonies at IHSAA State Championship events throughout the school year, planning and administering the annual IHSAA Student Leadership Conference in June, and engage in and support the activities of Special Olympics Indiana including the Unified Track and Field State Tournament.

Congratulations to Cece, and we wish her the best of luck in representing Plymouth High School on the IHSAA Student Advisory Committee for the next two years! 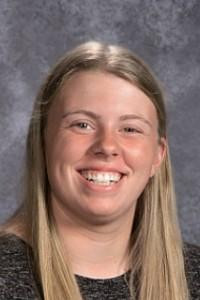