We recently came across some very old photographs associated with Plymouth Athletics.  We are going to share them on our website.  Some of you “Old-Timers” might have some relatives or friends pictured here: 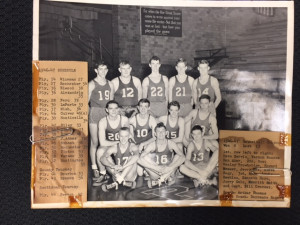 This picture is from the 1946-47 Plymouth Pilgrims.  The Pilgrims finished the year at 8-13.  They were defeated in the first game of the sectional by Bremen 52-44.  The Head Coach was Art Thomas.  Seniors on the team were Bill Crocker, Jerry Kain, and Wes Trowbridge.  Other members of the team were Don Aker, Jerry Cox, Lew Hawkins, Howard Menser, Steve Nagy, Dave Servis, Merritt Smith, and Vern Snoke.

I love the picture of Old Centennial Gym.  Not sure if you can see it but there is a portable basket set up on the stage.  And of course the sign on the wall, “For when the one great scorer…  This sign is now hanging in the Varsity Gym of Plymouth High School. 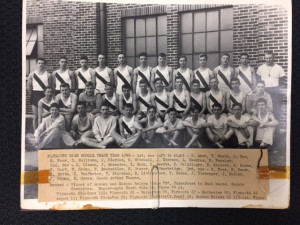 This picture is the PHS Track Team from the spring of 1946.  Team members include:

According to the records found, Plymouth won the Goshen Relays,  Kokomo Relays and were Marshall County Champs.  They were undefeated in dual meets.

More pictures will be coming in the near future.