Tristen McMillen, a member of the 2017 Class of Plymouth High School, has decided to continue his education and football career at Trine University.  Trine is located in Angola, IN.

Tristen is the son of Randy McMillen and Stephanie McMillen.  Tristen plans to major in Marketing while a student-athlete at Trine.  Tristen is currently ranked 111th in his class of 287.  He has a GPA of 3.04 which is just above a “B” average.

Tristen was voted to the Northern Lakes Conference 1st team this fall by the NLC Coaches.  He was listed as a fullback.

Trine finished their 2016 season with a 6-4 record.  They open their 2017 season at home against Manchester University on Thursday, 8/31/17.  Trine has the potential of returning three running backs to their 2017 roster. 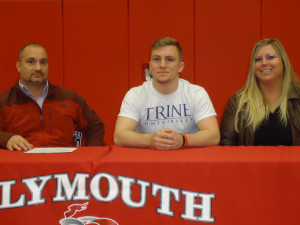