Doug Overmyer, a member of the 2017 Class of Plymouth High School has decided to continue his education and soccer career at the University of St. Francis.  St. Francis is located in Fort Wayne.

Doug is the son of Randy and Susan Overmyer.  Doug is currently ranked in the upper half of his class of 278.  He has earned a “B” grade average in his classes throughout high school.  He plans on majoring in Business Administration.

St. Francis finished their 2016 season with a 1-8 record in the conference and 4-12-2 overall.  They were a young team last year as they have the potential of returning 27 players that were on last year’s roster.  Their game schedule will begin near the end of August later this fall. 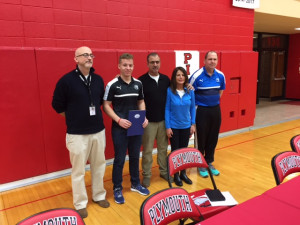