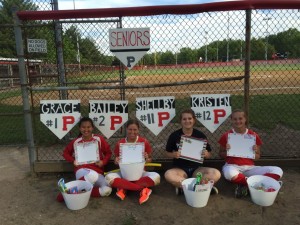 Grace Hilty, Bailey Brown, Shelby Falls, and Kristen McNeal all played their last home game for the Pilgrims.  The Pilgrims were defeated by CGA 13-2.

Brown had a double and triple on the day while Hilty had an RBI single to lead the Pilgrims at the plate.

The Pilgrims open up sectional play Monday vs Mishawaka at 1:00.