The Plymouth Pilgrims finish their NLC season Saturday afternoon at The Rock.  The Pilgrims host the Elkhart Memorial Crimson Chargers with the JV tip-off scheduled for 12:00 PM.

Memorial is playing under first year coach Kyle Sears.  Sears is a 2002 graduate of Elkhart Memorial, and has been an assistant for the last six years.  Leading the Crimson Chargers this year has been 6-5 senior Dimitri Giger, 6-0 senior Cameron Maxwell, 5-10 junior A.J. Gary, and 5-10 senior Darrius Baker.

If you cannot be at The Rock Saturday afternoon, tune in to AM1050 WTCA.  Brian Kunze and Nick Chaney will be calling the NLC contest.

The 2015 IHSAA sectional draw will take place Sunday in Indianapolis.  The drawing can be viewed at 4:00 PM on IHSAAtv.org.  The 4A Sectional 3 the Pilgrims participate in will be held at Penn High School.  Other teams involved include Mishawaka, Penn, South Bend Adams, South Bend Clay, South Bend Riley, and South Bend Washington.  One game will be played Tuesday, 3/3/15 and two games Wednesday, 3/4/15.  The semi-final contests will be played Friday, 3/6/15 with the championship game being played Saturday night on 3/7/15. 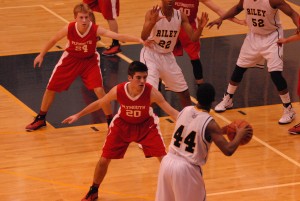 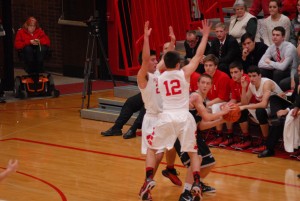